There are two types of people - the ones that love small dogs and the ones that love big dogs. No matter where your preferences lay, we can all agree that big dogs are awesome. They might be a bit more challenging to care for, but you also get a bunch of benefits from a big dog.

Is there anything better than when your huge furry dog lays next to you on a couch? They are like the ultimate living teddy bears that love to snuggle and cuddle. Plus, no intruders will dare to enter your property if you have one of these giants on guard.

Large dog breeds are usually rather lazy, and you won’t need to actively exercise them as you would some smaller, more active breeds like the Border Collie or a Belgian Malinois. Large dogs prefer staying in, spending time with their family who they protect, and having a nice, comfy bed that is just for them.

We bring you a list of our favorite extra large dog breeds with pictures and descriptions.

The Saint Bernard dog breed has the unofficial title of the heaviest dog breed globally, which is an impressive title to hold among these behemoths. They might be huge, but they are tender, sweet, and kind. These dogs were used for search and rescue efforts in St. Bernard pass in the Swiss Alps, where they head out after avalanches to find people trapped in snow on debris. These dogs make excellent pets, but you will need a bigger place to accommodate them. Saint Bernards can reach 30 inches and weigh 180 pounds. The Great Pyrenees, also known by their original name, Pyrenean Mountain Dog, is a large dog breed considered one of the world’s best livestock guardians. These dogs have long, white coats that protect them from harsh mountainous weather. They are powerful, large, and impressive, so make sure you learn as much as you can about them before deciding to go for one of these dogs. They can be great family pets and protectors, but be sure to provide them with their daily exercise needs. The Great Pyrenees can reach 32 inches and weigh 130 pounds. The Leonberger is a less-known dog breed that was created after the lion, the official animal of the German town of Leonberg. It is one of the biggest dog breeds and one of the fluffiest ones. They have incredibly soft double coats because the father of the breed, Mr. Heinrich Essig, wanted to create a breed that looked like the mighty lion. They were created by crossbreeding different breeds like the St. Bernard, Great Pyrenees, and the Newfoundland. Leonbergers can be 31.5 inches tall and can weigh 170 pounds. 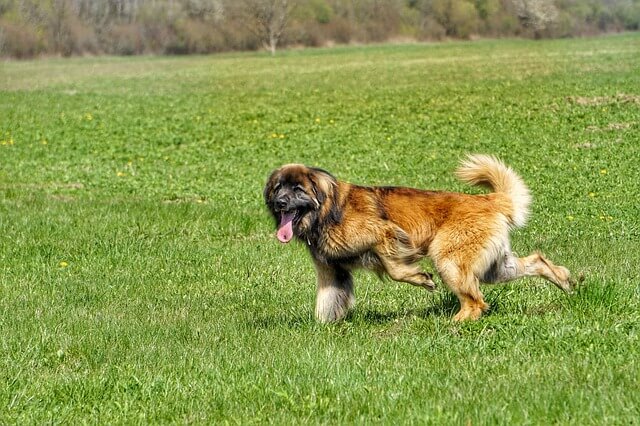 The Bullmastiff is a big dog breed with a nickname that indicates their original purpose - “The Gamekeeper’s Night Dog.” This is not a breed that is a good fit for newbie dog owners because they require a confident, experienced owner that will provide them with firm leadership and upbringing. These large dogs helped English gamekeepers hunt poachers and protect estates from trespassers and thieves. They are more energetic than English Mastiffs but still require less activity than medium-sized dogs. Bullmastiffs can reach a height of 27 inches and can weigh 130 pounds. The Russian Borzoi is an elegant large dog breed that came to the brink of extinction at one time in history. Russian nobles in the 1800s didn’t allow commoners to own these dogs, and when the Russian Revolution came in 1917, the total number of these dogs was very low. Thanks to secret exporting of the breed and state-controlled breeding did the Borzoi survive. After that, these large, thin dogs gained popularity worldwide. Borzoi are tall; they can reach 28 inches, but are very skinny and can weigh 105 pounds at the maximum. 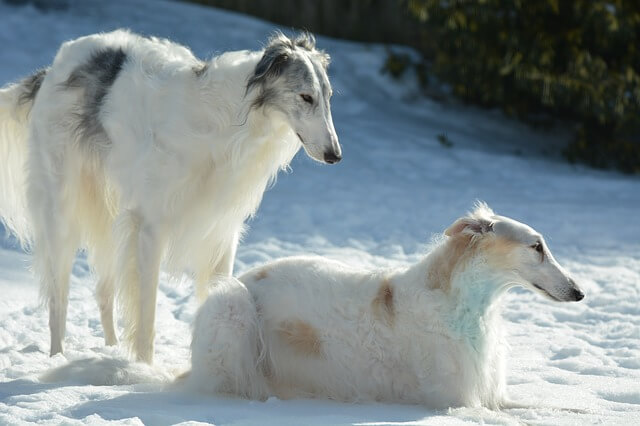 This is another extra large dog breed that was mostly kept because of their protective instincts and abilities. These big dogs come from the region of the Caucasian Mountains in Azerbaijan, Georgia, and Armenia, which can make you scratch your head when you learn their nickname - Russian Bear Dog. After the fall of the USSR, Russia filed the motion to register the breed under their patronage, and that is how they were nicknamed. These extra-large and robust dogs can be 30 inches tall and weigh 170 pounds.

Like Caucasian Shepherds? Check out this article about them: Russian Bear dog - fun facts about the wolf killer. The Newfoundland is the ultimate large family dog breed. They have a gentle and affectionate character, which makes them excellent for families with children of all ages. They are also very cuddly, and they have a thick double coat that makes them extraordinarily fluffy and soft to the touch. They are nicknamed “gentle giants” and “nanny dogs,” which indicates how well-behaved these big dogs are. They can reach 28 inches and weigh as much as 150 pounds. The Central Asian Shepherd Dog is a livestock protector and a shepherding dog from Central Asia’s region (like their name clearly suggests). It is an absolute giant and a formidable dog breed with powerful protective instincts. Central Asian Shepherds are really a large dog breed with a height of 28 inches and an average weight of 110 pounds. They can make excellent pets and guardians. Just make sure you have enough space for them to safely move. The Mastiff still holds the record for the heaviest dog ever; a Mastiff by the name Zorba was a whopping 343 pounds. These big dogs are direct descendants of the ancient Molossian dogs used by the ancient Greeks and Romans for protection and war efforts. All Mastiff-type dogs share their ancestors and can be traced to the same dogs. As they are called in the US, English Mastiffs can reach 32 inches and can weigh up to 220 pounds. The Great Dane is one of the biggest dog breeds out there and certainly one of the nicest. They might have a scary appearance, especially to those that are not familiar with them. The truth is that these large dogs are friendly and rather affectionate. They even tend to be scared and a bit shy. Their personalities have completely changed through selective breeding, and they are far from the fearless hunters they used to be.