The Russian Bear Dog is one of the most impressive dog breeds you could ever meet, and hopefully, you will meet them while they are of their duty. These dogs have long served their owners as protectors of both cattle and land. They are mighty and brave, a true superhero of the dog world.

They are originally from the region of the Caucasian Mountains in Azerbaijan, Georgia, and Armenia. These dogs thrived in the high altitudes, where they performed admirably for thousands of years. Russian Bear Dog got that nickname for their legendary capability of not backing down even when bears attacked their flocks. They were rarely used for hunting, but even that was a role they could play.

We bring you a list of 7 fun facts about the Russian Bear Dog.

The Russian Bear Dog is actually their nickname. This breed’s official name is Caucasian Shepherd Dog, or in original Russian “Kavkazskaïa Ovtcharka.” The first part of their original name is the name of the region they are from, and the second part, “Ovtcharka,” is Russian for Sheepdog.

Although they have the part Russian in their nickname, they are not originally from Russia. They are from Georgia, a state that was a part of the former USSR, which disbanded in 1991. Russia got the patronage over this breed because they filed the motion with the FCI first, but their original countries of origin are Azerbaijan, Georgia, and Armenia. These dogs look scary, and for a good reason. They were in charge of protecting their family and flock for a really long time. That is their original purpose, and it is clearly seen in the modern-day breed. The Russian Bear Dog is not afraid of anyone or anything. These dogs are known to go against wolves, leopards, and bears.

There isn’t much that can stop this dog in its track when it comes to saving or protecting their family. They don’t like other dogs or people entering their territory, and they will clearly show it. You wouldn’t want to accidentally wander into the territory protected by these dogs.

Russian Bear Dogs are considered to be one of the oldest dog breeds out there. They are also one of the oldest Molosser breeds still in existence today. Their beginnings can be traced back to 2.000 years, where they were serving the same job they are doing today - protecting and guarding.

Molossian dogs come from the ancient Molossian kingdom, where we can find first traces of large, powerful, fearless dogs who weren’t only used as protectors of cattle but also as war dogs. Those ancient dogs are ancestors to many different large, mastiff-type dog breeds like Cane Corso, Presa Canario, Mastiff, Bullmastiff, Central Asian Shepherd, Neapolitan Mastiff, and many more. Russian Bear Dogs are direct descendants of Molossian sheepdogs that came all the way from Mesopotamia.

To truly be useful protectors, these dogs needed to be huge. It is a good thing they are the descendants of the Molossian dogs because smaller livestock guardians wouldn’t be able to defend their flocks from large predators such as bears. Russian Bear Dogs are absolutely huge, and the largest specimens can reach 31 inches and could weigh up to 200 pounds.

Their size makes them a bit hard to handle, so if you are an inexperienced dog owner with love for large fluffy breeds, there are easier options than the Russian Bear Dog. These dogs are not for everybody and especially not for owners who have no experience handling such a massive breed. 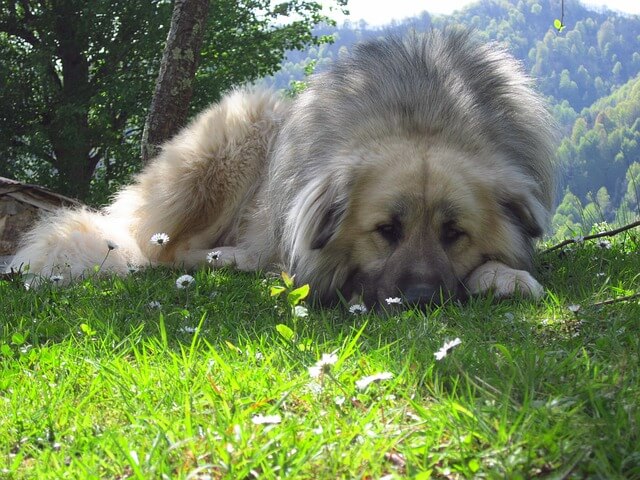 3. They worked as guard dogs in Russian gulags

During the USSR, many state prisoners were captured and sent to the harshest prisons in the world, located in the far north of Russia. Of course, that was the region of Siberia, and the prisons were actually forced labor camps called “gulags.” In those gruesome forced labor camps, officers and prison guards used the Russian Bear Dogs as camp guard dogs.

To survive such extreme weather conditions, the dog needed to have a specific trait - a thick double coat that would enable them to withstand the freezing Siberian temperatures. These camps weren’t only located in Siberia, but throughout Russia, and all of these camps used the Russian Bear Dog as their police and military dog.

During the USSR, everything became national property, and cynology programs and dog breeding were no different. USSR had a famous state kennel called “Red Star kennel” that was in charge of various breeding programs for different breeds. This Russian kennel was responsible for creating the Black Russian Terrier, a versatile working dog used by the Russian military and police for decades.

Russian Bear Dog became a significant part of the kennel’s program, and they were in charge of employing, training, breeding and promoting the breed throughout Russia and the rest of the world.

This breed is not meant to act like a loving family pet. This is a protector and a guardian that needs to have a job to do. They have strong protective instincts that drive the Russian Bear Dog to protect their family all the time and at all costs.

That being said, it is not impossible to train and socialize these dogs to become pets. They will need confident leaders that can train them and teach them how to behave. Even with proper training and socialization, they might not be the best choice if you have children. These dogs can react unpredictably, and it is unfair of us to expect them to become something they are not.