Dogs and humans evolved side by side. We learned how to use dogs and keep them as companions, and they developed skills necessary for their own and our survival. Naturally, the communication between the two species had to evolve. Dogs have a unique ability that allows them to read our emotions, facial expressions, commands, and energy. Many owners notice their dogs approach them when the owner is sad. That is not really surprising, but many owners wonder, “Can dogs sense sadness?” Here’s what our experts have to say about it.

Have you ever yelled at your dog after they’ve done something bad? You don’t even have to yell. Sometimes, it is enough you see your dog’s mess, and they are already acting scared or sweet to avoid facing your anger. Many owners notice their dog’s interesting behavior when it comes to recognizing human emotions, and you shouldn’t be too surprised to learn that dogs can actually sense your emotions.

Dog owners claim they knew that all along, and we certainly agree. However, to make such a claim, we needed concrete, measurable proof dogs can sense emotions. That is exactly what researchers at the University of Lincoln gave us in their 2016 study. They showed dogs pictures of different facial expressions and played sounds that might go with them. They saw dogs took their time to study the expressions and responded accordingly. That proved dogs can combine different cues such as voices and facial expressions to conclude what their owner is be feeling. That was the first time such behavior and reactions were observed outside our species. Subsequent studies followed, and they proved primates can do that as well. Dog’s ability to detect emotions was a significant evolutionary advantage that allowed them to evolve in their modern-day versions. This is a skill they’ve perfected since early domestication.

Dogs make fantastic cuddling buddies. That is just one of the things that make these animals great. They can support us during the hard times, and your dog can always be a positive part of your life. They don’t care how rich we are, what color our skin is, what our religion or political views may be. If you treat your dog right, they will love you with all their hearts. Even dogs that aren’t treated right love their owners. It is a level of selflessness we can rarely see in humans.

Dogs are fantastic emotional support dogs. That would be impossible without their ability to sense emotions. Most owners see their dogs approach them when they’re feeling a bit down and sad. That type of behavior caused them to ask the question, “Can dogs sense sadness?” The correct answer is - yes, dogs can sense sadness.

How does my dog know when I am sad?

As the 2016 study proved, dogs use a wide range of cues to detect their owner’s emotions. They will notice things like your demeanor, facial expressions, energy, and overall behavior. Dogs will react to those cues, and many dogs will try to cheer their owners up.

A 2018 study from the Department of Veterinary Medicine at the University of Bari Aldo Moro tested the dog’s ability to detect 6 basic emotions by only using their ears. They concluded dogs will react to the sounds of crying by processing them with the right side of their brain. That means dogs interpret them as negative, and they understand the emotion. When they combine sounds with facial expressions and their owner’s demeanor, dogs can get accurate information regarding their owner’s emotional state. Since dogs are social and compassionate, they will show their support and try to cheer their owners up. How do dogs show support?

Just recognizing emotions means dogs know when we are angry or sad, but the way they react is what sets them apart from other animals and even some humans. There is a good reason dogs make fantastic emotional support animals - they are empathic. Here are a few ways dogs will react to your sadness;

Some dogs will give their owners space. They sense we are unwell or sad, and they will simply sit at the opposite part of the room and look at us. They can wait until we call them to come to us, and only then will they cuddle.

Our favorite method dogs use to try and help us deal with sadness is by touching us. The dog comes up to the owner and places their head on the owner’s lap. They might paw at their owner and ask for cuddles. This is an effective method since petting a dog raises dopamine (the happy hormone) in our blood.

Dogs are amazing, and they will undoubtedly do everything they can to make us feel better. They can quickly notice our emotions and sense sadness. They can do that by combining different cues we “display” with our expressions, demeanor, and vocalizations. Dogs can also detect fear, anger, and happiness. They still have problems detecting disgust because we have a different definition of it. 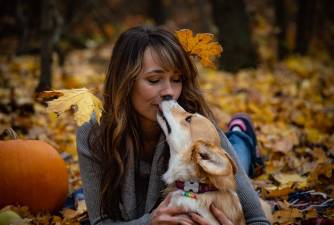 Can Dogs Be Gay
Featured Articles Dog Trivia Did You Know