Before you start reading this article, we would like to say that this is a sensitive topic, but dog fighting’s brutal truth. The more we know, the more we can do to put an end to the worst and most cruel animal practices in the world, which dog fighting is a part of.

Dog fighting has been a widespread practice since Roman times, and dogs have been pinned against each other as well as against other animals for thousands of years. Luckily, society has thoroughly changed, and these brutal and barbaric practices have been outlawed and banned in most places on Earth. If you are interested in learning more about dog fighting through history, check out this article - Dog fighting through history.

This blood sport is terrifying as it is, but there is one aspect that is absolutely horrifying and disgusting. People who want to be a part of these illegal activities need to train their game (fighting) dogs without injuring them. Other than physical training that will make the fighting dog stronger and faster, these people also use a bait dog.

What is a bait dog?

Here comes the worst part of the story - a bait dog is a dog that people use as a thing their fighting dog will tear up. Yes, you read that right. This is the worst sort of fate any dog can have. People who train fighting dogs teach them how to maul and kill other dogs on innocent dogs that are mostly incapacitated so they cannot fight back. Their mouths can be shut with duct tape, and some were found with their teeth pulled out.

The owners of fighting dogs often unleash several fighting dogs on one bait dog because they believe these dogs will become more ferocious if there is competition involved. Bait dogs are often tied to a tree or thrown in a fighting pit, so there is no chance they could get away from game dogs.

This is deeply disturbing, but luckily, there are plenty of volunteers out there trying to stop all illegal dog fighting activities. Some of these activists have even saved bait dogs from shelters and helped them recover physically and mentally.

What dogs can be bait dogs?

These despicable people need anything with fur, meat, and blood to act as bait dogs. Usually, they use submissive Bully breeds that aren’t showing any promise in fighting pits because it is the easiest way to get a dog without being suspicious. Dogs that have lost or have a calmer temper usually suffer this terrifying fate.

The problem is that this practice makes them run out of bait dogs, and when that happens, criminals don’t buy dogs: they steal them. One volunteer said he was a part of the raid, which saved many dogs destined to become bait dogs. He reported that the person they saved these dogs from had already taped their muzzles, but the mauling hasn’t started yet. Luckily, they got there in time to save the dogs, and the perpetrator was arrested and sentenced to the maximum sentence. 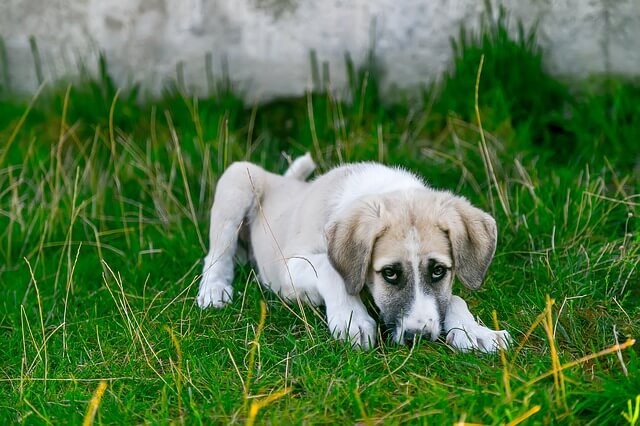 The chilling part is that they didn’t only save Pit Bulls and other bully breeds. They saved a Golden Retriever, a Labrador mix, two Chow Chows, and a small Basenji-type dog, which shows these people don’t choose. As a Golden Retriever owner, this information sends chills down my spine, and there is nothing sadder I can imagine for a dog.

This story ended up happily because the Golden Retriever that was saved belonged to the neighbor of the person that was breeding and training fighting dogs. He reported his dog missing a couple days earlier, and he was fortunate his dog escaped certain death.

The most important thing to do is to keep our beloved dogs safe. Keep an eye on their activities and don’t leave them too long without supervision, especially in busy areas with many people.

In the grand scheme of things, it may seem there is not much we can do, but remember that even the tiniest spark can cause a wildfire. Keep your eyes open and remember that even reporting suspicious activities can mean the difference between life and death for many bait and fighting dogs.

Dogs are usually forced to fight; it is not the career they have chosen for themselves. They are usually kept in terrible conditions, and most of them don’t live a happy, healthy, or long life. Most saved dogs require extensive rehabilitation, and some aren’t able to have a normal life. Bait dogs are scarred for life, and the ones that are “lucky” enough to survive can have a pretty hard time adjusting to normal life. Luckily, many volunteers are trying to put an end to this barbaric and illegal activity, and there are some ways we all can help. Here are some suggestions for all of us that would love to do something about it:

Donations are always a good thing and the opposing side plenty of money that helps them hide their activities. We need to make sure that the good guys have enough resources to fight the good fight. You can donate to these organizations looking to stop all dog fighting;